This is a long and charming route that winds through forests and touches upon sanctuaries, castles and medieval villages set in the southern hills of the Lake Trasimeno area in the townships of Panicale, Paciano and Città della Pieve.

The starting point is near the town of Tavernelle, from where the route leads in the direction of Perugia and then climbs towards the Santuario di Mongiovino sanctuary and the fortified medieval village by the same name that stands on a hill at 490 m a.s.l.. The literal meaning of ‘Mongiovino’ is “Mountain sacred to Zeus” and derives from the cult of this divinity, practiced in this area in ancient times (confirmed by the discovery of an ancient temple dedicated to Zeus).

The Castle boasts strong medieval walls dominated by a tall tower with Guelph merlons. Inside the walls stands a small 14th century church, decorated with frescoes. Proceed along the ridge up to an abandoned rural house standing next to the road near the ‘Torraccia’ or ‘Cimarella’, a characteristically cone-shaped hill covered in pine trees and cypresses, visible from quite a distance. Descend the track that proceeds in the shade of the forest towards “Passo Buca del Calcinaro” and a crossroads formed by a total of six roads.

Take the ‘Vicinale di Scornabecco’ road that crosses along a hillside entirely covered in forest that leads to the villane of Muserale and on towards the next junction opposite the church of Colle San Paolo. Climb to the left towards Villa Montesolare and Porta Materna, staying on the main road, until you reach the top of the hill near the Castello di Montali castle. Take the ridge on the right with a breathtaking view of Lake Trasimeno and then down towards the valley of the Tresa stream until you reach the road that connects Casalini with Panicale.

Along pleasant stretches of tarmacked roads, reach Paciano after riding through Le Mura and Colgiordano. It is worth your while to take time to visit this peaceful and beautiful medieval village. Then descend towards the fork for Varacca-Pietreto and then immediately up a short but quite demanding climb that leads to the ancient houses of Pietreto. Proceed towards Moiano along an unsurfaced road travelling halfway up the hill through very pretty olive groves. Once in Moiano you are now in the Città della Pieve area, so ride towards Piegaro along a stretch of road then turn left to climb along a pleasant bridle path amidst turkey oak and durmast copses and heather until you reach the top of the hill in the Casa Pausillo/Po’ del Vento area and on towards the meadows of Pausillo.

Cross through the pine wood. Go down along a characteristic uneven track that descends flanked by two rows of ancient pine trees, and on with various ups and downs in the direction of Monte Petrarvella, recognizable in the distance thanks to the tall Austrian black firs that cover its rounded summit. A thrilling and panoramic descent rapidly takes you to Panicale, yet another truly beautiful medieval village absolutely worth a visit. Then, along the road for Missiano, you can soon return to the starting point in Tavernelle. 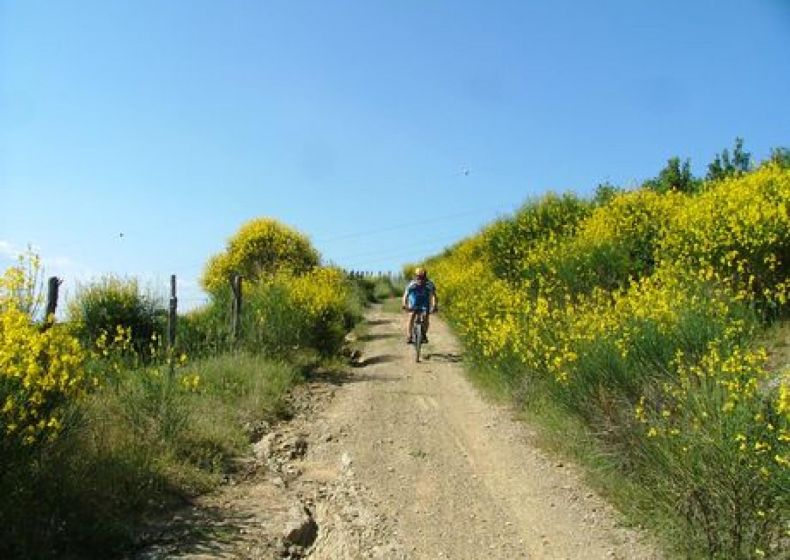 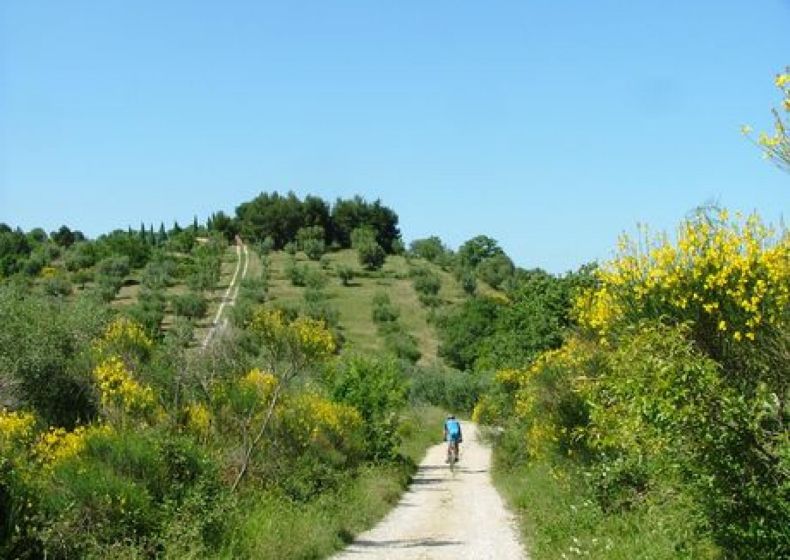