The starting point for this walk is the parking area of the small cemetery of Missiano. After a short walk along the provincial road that connects Missiano to Panicale, we turn left onto a dirt road heading uphill. We cross an area covered with olive trees and low dry-stone walls, which opens up onto the surrounding landscape: the hills of Panicale with Mongiovino and Monte Solare in the background, whereas the hamlet – with its bell tower, monuments and old houses – appears in front of us.

We then enter the woods, where we can see downy oaks, turkey oaks, holm oaks and manna ashes. In terms of shrubs, flora is represented by Spanish broom, arbutus, rockrose, heather, dog rose and privet. As we climb, to the left we can see the Nestore river valley, with Piegaro and Montarale in the background. Before we reach the summit of Monte Petrarvella (627 m), we cross a panoramic plateau and go past an abandoned farmhouse set in a panoramic position. On the left we can see the antennas of Monte Pausillo; to the right is the slope of the hill of Petrarvella, as well as a different view of Panicale and its surroundings. The area is uncultivated and boasts rich scrub with brambles, Spanish broom and blackthorns. Taking a winding track that goes through low and sparse scrub, we come to the summit of Petrarvella, recognizable because of its crown of Austrian pines.

After a brief stop, we descend towards Panicale, initially along a rather rough track through the scrub and then on a panoramic crest, from which we can see Lake Trasimeno on the left and the hills facing the Nestore river valley on the right. Some of the small renovated farmhouses along the way are lovely. We continue our descent to a concrete road that leads straight to Panicale. Along the last stretch of this road, we get an overhead view of its historic district.

Once we get to the foot of our descent, it is worth taking a stroll through the town and along the lookout that encircles the north side of the town walls. By following the signs, we can quickly get back to our starting point, passing close to the cemetery and the church of the Capuchins, a striking historical site in dire need of renovation. 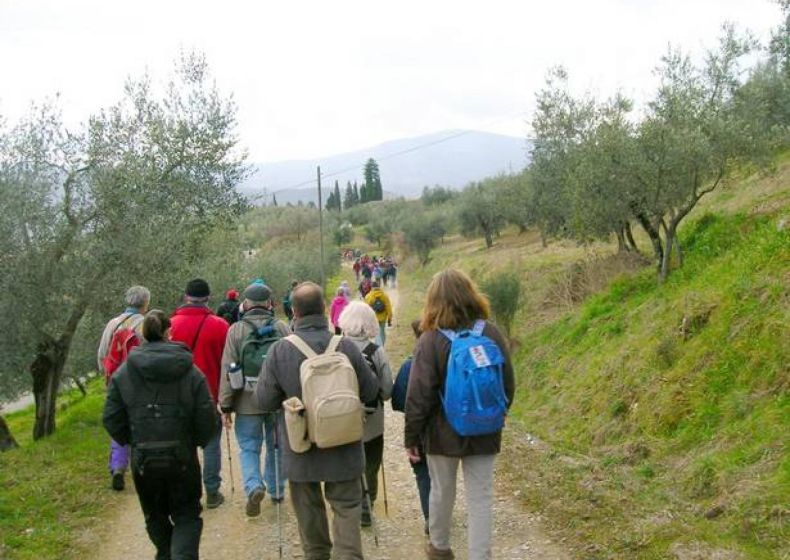