We set out from San Giovanni del Pantano and take the paved road towards Pian di Nese. After about 100 metres, with the old inn to our left, we turn left onto an unpaved road that goes up towards the cemetery. We continue along a wide road that immediately offers us a marvellous view, with Monte Tezio and Monte Gudiolo behind it and the hills extending towards Perugia and Lake Trasimeno ahead of it. On the left, a series of gullies forms the Caina torrent, which flows into the Nestore. We continue along this road, with the lovely hamlet of Col Giorgio (465 m) to our left, and enter into oak, maple, manna ash and hornbeam woods. We then go right onto the dirt road heading uphill.

Along this segment, it is worth taking a detour to visit the site with the Etruscan tomb at Faggeto. Returning to the main route, we continue uphill, skirting – on the right – the hill of Cresta della Fornace, where the tomb is located, which has a maximum elevation of 616 metres. The track becomes increasingly open and panoramic, and continues around the hill. This area is characterized by barren stretches that show the effects of erosion and the formation of ravines. We come to a fork and, rather than taking the road leading to a hilltop farmhouse, we take the one that brings us to a wide unpaved road heading to the right. After several seemingly flat stretches, it descends steeply. The route now opens up towards the valley of the Nese torrent and the hillsides that border it (Colle Campana and Monte Acuto). The entire area has broad areas of pastureland that have historically been managed by Sardinian families. On our way down, we can see several farmhouses and a small fortification called Bisciaro (537 m a.s.l.).

The last section, a winding road, leads us to a fork where we turn right onto an unpaved road that brings us to the municipal road connecting Ponte Olivello and Ponte La Nese, and then to a small bridge over the Nese torrent. A few metres before the bridge, we turn right onto an unpaved road that climbs rather steeply. Initially we cross ancient agricultural areas, then entering into the woods and passing the Villa del Faggeto and its large garden, which is now overgrown. We go back onto the wide unpaved road we took at the beginning and soon return to San Giovanni del Pantano. 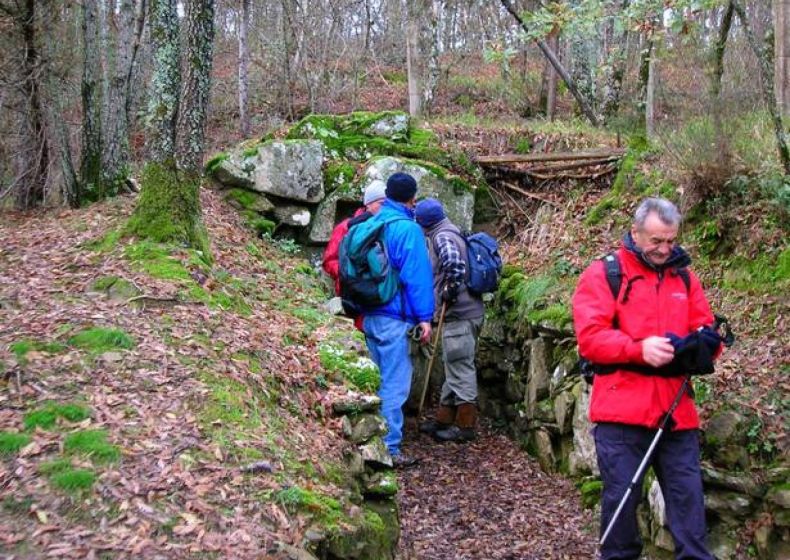